Chalkidiki: A Cheaper Alternative to the Greek Islands

Money is definitely not something in plentiful supply at the moment. In fact, finding twenty-cents in my pocket the other day was the richest I have felt in a long time.

Unfortunately that twenty-cents is not about to transport me, or the team I am travelling with, to the Greek Islands. Those beautiful, postcard-worthy islands were, and still are, just out of my reach. With the sad realisation that it was just not going to happen, the grey streets of Thessaloniki felt very hot and very grey and just not very nice at all. Instead of white washed buildings and donkey rides, I got graffiti and the public bus. Instead of crystal blue waters, I once saw a dead rat float by where I was standing in the harbour (disease anyone?).

Having spoken to many Greek people in the city, the answer came in the form of a three-pronged peninsula North of Thessaloniki called Chalkidiki. From homeless people to Greek businessmen, the word on the street was that Chalkidiki had the best beaches, the clearest water and even a quasi-mythical mountain called Mt. Athos that was only open to men (ahem.. discrimination).

And above all, the best news was that it only cost 10 euros by coach to get there although sit near the back because the driver will smoke the whole way. If you don’t even have that to spare, hitchhiking is a safe and viable option as well. With so many cars going back and forth from Thessaloniki, I don’t think you would even have to wait 20 minutes. 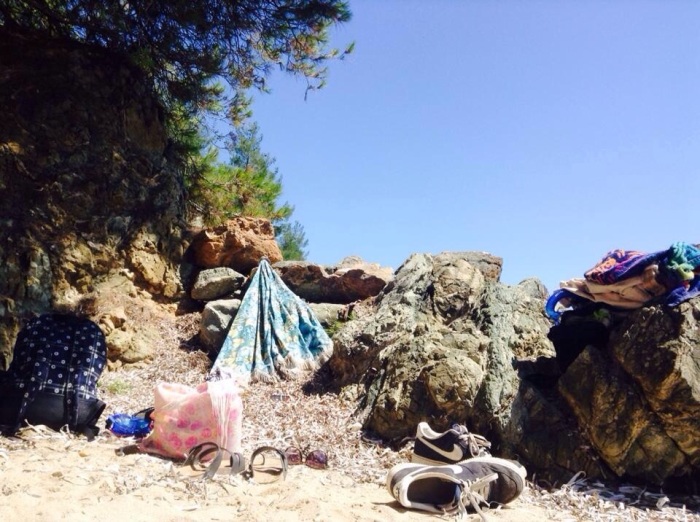 The drive from Thessaloniki to the second peninsula, Sithonia was like slowly being given oxygen to breathe again. The wide open spaces! Breathe The olive trees! Breathe The rocky coastline! Breathe. This was the Greece I was looking for.

Sithonia is less developed than the first peninsula and holds its appeal in untouched beaches, rocky cliffs and smaller, less touristy towns.

Like many other countries, Greeks love to spend summer at the beach and for many that includes camping! This means that there are so many cheap camping options to choose from. From upscale tents with televisions (I refuse to use the word glamping), to less luxurious options with wooden cots, you can choose your level of comfort. If you’re dirt-poor like me then you will probably be sleeping in the dirt and taking the option of pitching your own tent.

The only picture I actually took of the tent. Two days before it flooded with water.

All in all, camping wasn’t so bad. I didn’t wake up with a spider on my face or stay awake all night in fear of being crushed by a tree, which is what happened the other two times I went camping. The tent only flooded once and due to my obsession with water-proof bags, nothing got wet. The children’s camp next door stopped blasting Crazy Frog and that inane gummy bear song at midnight and we were all happy campers, literally.

And really, who could complain when you were right next to this. 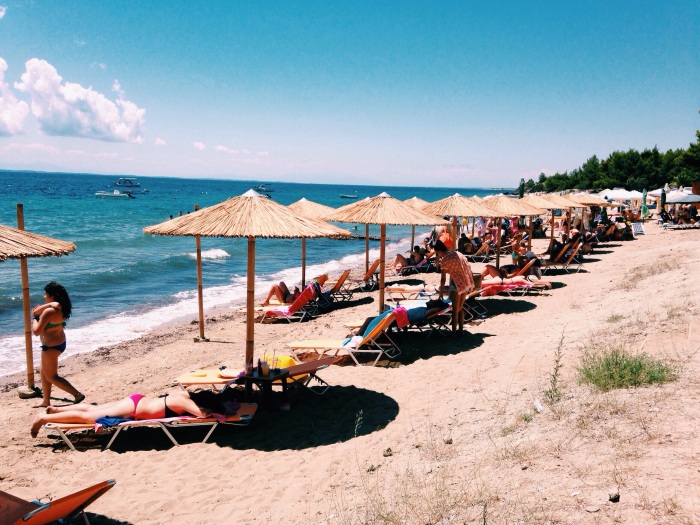 After eight days of camping, a more comfortable bed was beckoning and we moved to the beachside town of Nikiti. The town had a gorgeous old sector up on the hill and a bustling newer waterfront that is lined with restaurants. The town was popular with the yachting crowd and I’m not ashamed to admit I may have made sad-eyes to the people on the boats, willing them to invite me on their stupidly cool multi-million dollar yachts. The beach was always bustling and grilled corn was sold, ice cream was consumed and many hours were spent sloth-like in a sun lounger. A cool thing about beaches in Greece is that most cafe’s and restaurants have serviced sun loungers on the beach. All you need to do is buy a coffee or lunch and you can spend all day on the chairs pretending you are actually in a fancy schmancy resort. Some of them even have free wi-fi.

Although most places were completely booked out we managed to find a place for five people for 65 euros. A bargain if you are travelling with a group of people. Renting a room, as opposed to staying in a hotel is by far the most popular option making it perfect for those on a budget. Cooking a simple meal for breakfast and lunch saves you money! 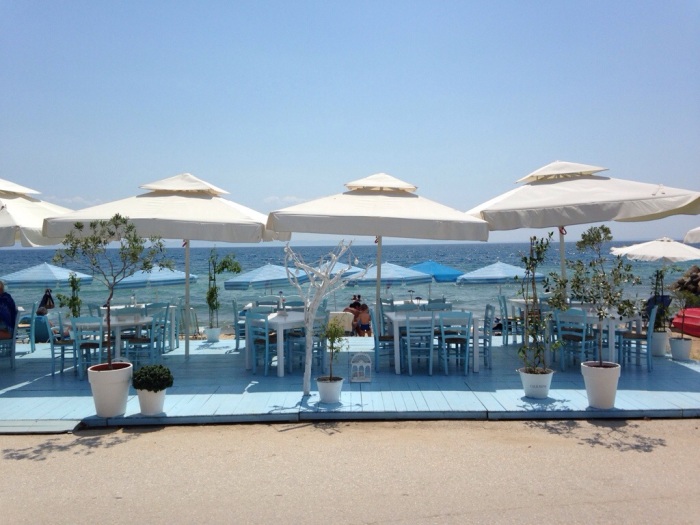 Debating whether to swim to Santorini

After three days in Nikiti, Thessaloniki was pulling us back into its sweaty, grey arms (ew) but I left refreshed and felt that I had been exposed to a true Greek vacation. We had taken a smoky coach, camped in the dirt and lazed on many a gorgeous beach just like everybody else.

So maybe Chalkidiki peninsula isn’t a replacement for the Greek islands but I hope, for the more budget conscious amongst us, that I have offered a suitable alternative.

Have you been to Chalkidiki? What about the Greek islands? Do they even compare or am I just blissfully ignorant on what I am missing out on? Let me know in the comments below or email me at dirtypawsblog@gmail.com.

One thought on “Chalkidiki: A Cheaper Alternative to the Greek Islands”